“Nathan for You” season 4 knocks it out of the park

Nathan Fielder has artfully constructed four seasons of must-watch television that pairs the cringeworthy moments of “The Office” with the sociological intrigue and horror of an excursion to the Department of Motor Vehicles. “Nathan For You” just wrapped its fourth campaign last Thursday, capping off a whirlwind season with a finale unlike anything that’s ever aired on Comedy Central.

The premise of the show is simple: Fielder meets with struggling businesses in Los Angeles and pitches them ideas on how to increase sales. The only problem is that Nathan’s ideas are so far-fetched and preposterous that it would take someone either incredibly vapid or equally desperate to give him a shot. And, of course, they always are.

Take, for example, the season premiere. Fielder visits a diner in central California and comes up with an idea to get them a little publicity. No, he doesn’t buy ad space or get a pimply 15-year-old to twirl a sign, he hires a Michael Richards impersonator to show up to the diner and leave a tip so generous that the news will run the story. Sure enough, word spreads that Kramer from “Seinfeld” left a $10,000 tip.

It’s not just the fanciful ideas that Fielder conjures up, it’s the extreme lengths he goes to take them from concept to reality. He spares no expense and always prioritizes his clients over his own personal dignity for the good of the show. That means committing fraud so he can obtain a pacemaker that will allow him to bypass security at a semi-pro hockey game in order to illegally sell chili from underneath a fat suit.

Or, there’s the time he started a rock band called The Bonzai Predicament and wrote a song about man’s relationship with nature entitled “Orphaned Skies,” which Fielder then arranged to be stolen by Shell Gasoline and purposefully ignited a controversy that could potentially make their song a hit. The reason for all that? It was so Fielder could insert a smoke detector into the song so that it could be classified in the public conscious as a musical instrument, which would allow the shipping company he was helping to bypass any expensive tariffs when they shipped smoke detectors to South America. A simple concept made needlessly and hilariously elaborate.

The season also veers off at times into a self-referential realm, highlighted by an episode called “The Anecdote” in which Fielder needs an interesting talking point for when he’s interviewed on “Jimmy Kimmel Live.” Deciding that his life is too boring for late night, Fielder stages an absurd situation in which he’s pulled over for speeding on the way to a wedding with a woman’s ashes in his suit pocket. Not only did the story have to be outrageous, but he decided it would also have to be entirely true so he wouldn’t have to lie on national television. Fielder told the story on “Kimmel,” and then proceeded to tell the same exact story on “Late Night with Seth Meyers.”

Season four of “Nathan For You” distinguishes itself from its predecessors in that it takes advantage of the cult viewership that has grown so familiar with not only Fielder and his many awkward, yet endearing quirks and idiosyncrasies, but also the bizarre cast of secondary characters that have become essential to the show’s lore. There’s Salomon Flores, a production assistant for the show who’s looking for love. There’s Brian Wolfe, a private investigator who parlayed his “Nathan For You” fame into his own reality on the Investigation Discovery channel. The crown jewel of all the bit players is Bill Heath, a professional Bill Gates impersonator. In the two-hour season finale, Bill gets his time to shine.

The seventh and final episode of the fourth season, called “Finding Frances,” chronicles Fielder and Heath as they track down the whereabouts of a woman named Frances Gaddy, whom Heath laments that he should have married over 50 years ago, but lost touch with back in 1961. What follows is an epic journey that takes the two from California, Arkansas, and finally Michigan. They leave no stone unturned in search of Heath’s long lost love, and it results in a remarkably beautiful human interest story that subverts the usual tone and formula of the show in exchange for a feature-length documentary episode that’s authentically touching and relatable on a deeper level than the show has ever gone.

“Nathan For You,” from the absurd business schemes to the genuine story of a man undeterred by decades gone by in search of lost love, is the most original show on television. It’s delightfully exhausting and wonderfully bizarre in a way that we’ve never seen, and if the first three seasons didn’t sell that, the fourth cemented it. 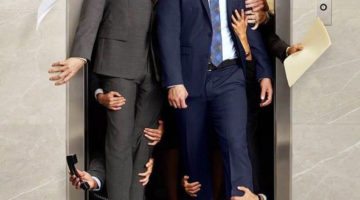