On a frigid night, the final night of spring break, as UNR students regrettably returned to Reno in the hail, two stellar bands stopped in town. Jazz-dance band Moon Hooch and psych-punk band Acid Dad performed at the Saint and Loving Cup, respectively, as a part of a Fresh Bakin’ event on Sunday, March 25.

Reno gets the best shows on the worst dates. Touring bands stop in Reno on a weeknight after playing San Francisco or Portland (i.e. somewhere cool). Some attendees kept checking their phones, seeking an appropriate time to slip out and get a good night’s rest. Others drank more frantically in order to silence their impending responsibilities. Sometimes bands see Reno as less important and present a lackluster show. Thankfully, these bands did not disappoint.

Six Mile Station and The Accidentals opened for Moon Hooch. The audience swayed and swooned to Six Mile Station, a local Americana band, as they belted out raucous bluegrass tunes. They ended the show with horn players parading through the crowd. The Accidentals hypnotized the crowd with their eclectic punk jams, including a haunting cover of “Kids” by MGMT.

By the time Moon Hooch took the stage, everyone was drowsy and restless, but they soon received a shock to their consciousness. Three musicians with a synthesizer, a drum kit and a collection of woodwinds blew everyone’s minds. Critics struggle to pin down Moon Hooch’s sound, a clash of jazz and EDM: thumping bass battles screeching saxes. The band calls it “Cave Music.”

“Cave music is like a whirlwind that pulls you out of the known concept of reality and twists you into an ever-changing, always creative process of perception,” said Moon Hooch saxophonist Wenzl McGowen. “We lose our minds. And by minds, I mean conceptual framework that inhibits the purest expression of the soul. That’s maybe a little too poetic. But something along those lines. Just jump over the fence and run into the unknown and run with such conviction and passion that you always find trust and creative surprises.”

The Saint filled with more people than usual. During the openers, patrons leaned on pool tables and chatted. When Moon Hooch took the stage, everyone thrashed around and screamed.

“It is invigorating to see the audience bite their lips and stomp their feet and twist and turn their hips and see their sweat hit the floor and see them losing their minds helps us lose our minds more,” McGowen said. “It’s a collective process of inspiration that cross-pollinates the audience and the performer.”

Moon Hooch currently tours in support of their new single “Acid Mountain,” which Mike Wilbur wrote five years ago then shelved until recently, and their upcoming EP “The Light it Up EP” which releases on April 6. McGowen says it is full of sound-waves including their “collective struggle for liberation.”

“We have worked very hard to put ourselves into this music and put our passion into this music,” McGowen said. “I think when you play the EP and listen closely, you can see birds flying through the sky and flowers bloom and you can see mountains rising out of the ground and you can feel the waves crashing on the rocks.”

Before this tour, Moon Hooch took some time to decompress. They spent time with family and friends as well as worked on music. In the past, touring wore them down, but now they feel refreshed.

“You don’t sleep regular hours every night and then have to drive or fly around the country,” McGowen said. “You have to constantly be around the same people. It can really get to you. You can lose balance and motivation. But we took some time off to gain some stability.”

McGowen was born in Spain, and also lived in Germany, Austria and Portugal. He says “he’s a big mix of a bunch of different cultures and none of them.” The members of Moon Hooch met in New York, where they started performing by busking in the subway stations.

“I don’t miss bringing our instruments down there,” McGowen said. “I don’t miss being harassed by police. I don’t miss competing with other buskers about who gets the spot. But I do miss the surprise element. I do miss playing our music to a demographic who has no real intention of listening to us. I do miss our unexpected dance parties that sometimes continuously erupt on the subway platform.”

“He’s not just a jazz musician, he’s a saint who plays saxophone,” McGowen said. “Many of his contemporaries didn’t realize how deep he really was. He wouldn’t talk about much, but you can feel it when you’re listening to his later stuff. He’s onto something. He’s saying something. He has a message in his sound. If you really focus on it. He can help people with their personal struggles.”

In his free time, McGowen writes, reads, meditates, “looks at trees and [breathes] the air.” He says he is looking forward to every moment.

Those with stamina headed over to the Loving Cup. The Loving Cup is the hipper bar (chandeliers, paintings, cool lighting, etc.) but the inferior music venue. It’s claustrophobic and bands are tossed to the side.

“The complicated part is that every room is a variable,” said Acid Dad drummer Kevin Walker. “Every sound guy is different. In the studio we manage to eliminate those variables to make the recording process smooth. We’ve gotten pretty crafty at it in our own space. But some of the excitement of playing live is that my snare drum might sound totally different in two different rooms. Sometimes that’s a really bad thing. Sometimes it’s actually kind of cool.”

Acid Dad is touring currently to promote their new self-titled debut album. They just came off a ten-day stint at SXSW. One show included a Cajun restaurant, floor littered with crawfish. Only their friends and people from the studio showed up. The show devolved into a jam session wherein they practiced new songs. Two nights before their Reno concert, they sold out a show in LA.

The band’s name comes from their prolific use of psychedelic drugs, however they have since “hopped off that wave.” Similar to an LSD trip, Acid Dad’s music gives the feeling if it ceased to move forward, everything would collapse. JP Basileo, the band’s tenth and current bassist, recalled when he dropped acid an hour before his second show: an opener for A$AP Ferg. The acid kicked in as the crowd began calling for Ferg. “It was a bad trip,” he commented.

In the future, Acid Dad would like to work with David Fridmann, producer of Flaming Lips and more recently Spoon.

Next post Review: 'Sherlock Gnomes' leaves the viewer clueless to its existence

Henry Chadwick to perform at The Saint on Aug. 10 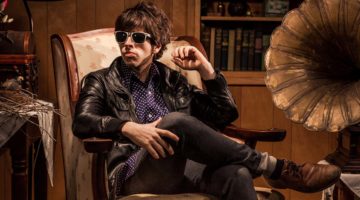