Driver flees scene of crash in front of sorority house

Photo courtesy of Daniel Porter
A black Nissan left on the scene of the accident on Tuesday, April 24. The driver has yet to be identified.

Just before 9:30 p.m., a black Nissan sedan hit the guardrail outside the Delta Gamma sorority house on N. Sierra Street. The man driving the car ran away from the scene on foot immediately after the crash took place.

Upon a search of the car, officers found several alcohol bottles inside. The contents of the car led officers to believe that alcohol may have been involved in the crash.

University student Daniel Porter witnessed the accident Tuesday night while returning from the movie theater with his girlfriend and describes it as something one might see in a scene from a movie.

“We were stopped at the light in the left turn lane on Sierra Street turning left onto University Terrace and 9th Street,” Porter said. “There was an early 2000s black Nissan sedan rushing to make the left turn onto Sierra street from 9th traveling westbound. He was driving erratically and was going around 50 mph. He skidded a little bit but pretty much hit [the] DG house retaining wall head-on.”

According to Porter, it seemed to be going in slow motion until they heard the loud sound of the impact.

“I told my girlfriend to call 911 so while she was on the phone I ran over to check on the driver,” Porter said. “I saw only one person in the car and went over and asked if he was okay. All of a sudden, he just took off running so I tried to get a description because he seemed under the influence. The car was smoking and there were other people on the scene at this point so we turned off the car and waited for the police to arrive which only took about five minutes.”

Porter described the man likely to be in his early to mid-twenties, of Hispanic ethnicity and around six feet tall.

No injuries in relation to the accident have been reported.

University’s Police Services are still searching for the driver responsible. University police are urging anyone with any information to report anything they know about the incident to them by calling (775) 784-4013.

Hollywood will die, and mediocrity will rise from the ashes 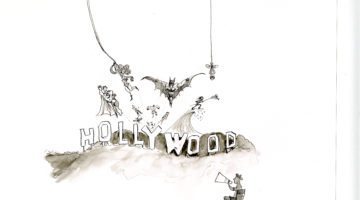 Member of Delta Gamma sorority passes away over the weekend