Andrea Wilkinson/Nevada Sagebrush. Caleb Martin lays the ball up against Air Force on Saturday, Jan. 19. Martin is second on the team in scoring with 18.1 points per game.

Since suffering their first defeat of the season to New Mexico just over two weeks ago, there have been more and more questions surrounding Nevada men’s basketball. Why isn’t Jordan Brown playing more minutes? Why is the team shooting so many threes, even with minimal success? Why can’t the Pack have a good first half? But the biggest question of all is what is wrong with Caleb Martin?

After Saturday night’s victory over Air Force, head coach Eric Musselman said it was unclear if Caleb Martin would even play as he was throwing up before the game due to the flu.

Martin’s illness may excuse a poor shooting performance for one night, but it doesn’t excuse a underwhelming season. In the last six games Martin has posted 7, 8, 23, 27, 10 and 10 point point tallies. The 23 point game was against San Jose State after Martin texted assistant coach Gus Argenal asking to come off the bench before the game, hoping to find his spark once again. Martin shot an efficient 8-15 from the floor and 6-11 from three in the game. The spark only lasted for one more game with a 27 point showing against Fresno State, although he shot just 4-15 from three-point distance.

The AP preseason All-American may be second on the team in scoring averaging 18.1 points per game — Jordan Caroline lead’s the team averaging 18.3 — but he’s shooting 39.3 percent from the field and is even worse from three point range at 32.0 percent. Caroline shoots more efficiently than Martin from everywhere but the on the floor but the charity stripe.

Last season, Martin averaged 18.9 points a game on 45.4 percent from the field and 40.3 percent from beyond the arc. Martin did much of this after suffering a Lisfranc injury in last February. The injury left Martin in a boot well into the summer. Martin’s signature leg kick on his jump shot has drawn less fouls this season than last as players are more diligent in their defense of the reigning Mountain West Player of the Year.

Martin’s decline is not just from last season to now. His numbers have declined since the beginning of the season. In the first eight games of the season he shot 50 percent or greater from the field five times, and over 40 percent from the three point line five times as well. In the last 11 games he has done each only once, both coming in the matchup against San Jose State. The opposition in the latter 11 games is arguably tougher, but is no excuse for the decrease in production and efficiency.

All of Martin’s shooting numbers have declined from month to month in the first three months of the season. In seven games in November, Martin averaged exactly 21 points per game. Through six games in January Martin averages exactly 11 points. Even his steal numbers have diminished during this stretch. Martin has just two steals this month, after having 19 total steals in November and December. This is a 180-degree flip of last season, when Martin peaked in January, right before foot injury.

What is even more shocking for Martin this season is the vast differences in his performances in the first and second half of games. Martin in the first half has been abysmal while, just like the rest of the team, he kicks it into a different gear for the final 20 minutes.

Martin seems to play his best against the Pac-12. In three games against Pac-12 teams — Arizona State, USC and Utah — Martin averages 20 points per game shooting at a 44 percent clip. In six games against Mountain West foes, Martin averages just 11 points shooting at 32.9 percent. Although a troubling sight at first, the lower conference numbers can likely be attributed to teams facing Martin for the second, third, or even fourth time since his debut last season.

The Wolf Pack have 12 conference games remaining before the Mountain West tournament. In 26 career games against Mountain West opponents, Martin averages 16.9 points per game. If he wants to prove his preseason All-America honor was not a mistake he’ll needs to adjust down the stretch.

Martin has shot terrible, but bad shooting is something affecting, or rather infecting, the entire team. Nevada have taken the most three point shots in the conference despite only shooting 32.6 percent from three point range — worst in the Mountain West. Only Caroline and Jazz Johnson have three point percentages higher than the team average this season. Musselman does not plan on change the amount of threes the offense takes a game, so it should not change for Martin either.

Shot selection has drastically changed for Martin this season. Last season Martin took a total 491 shots from the field and 179 free throws. 248 of the 491 shots were from beyond the arc, accounting for 50.5 percent of his shots. This season Martin has taken 272 shots from the field and 185 of those have come from three point range — a 68 percent mark. Martin success last season revolved more around getting to the basket or even just stepping inside the line for a high-percentage shot. This season Martin’s past style of play seems to have gone out the window and, along with the rest of this team, has focused on more of a “three and D” approach.

Martin’s success this season has come with the combination of taking around 10-12 threes a game and getting to the free throw line about 6-8 times — based on his 10 most efficient halves of the season. When Martin gets to the free throw line, he becomes a multi-dimensional player offensively and harder to guard, a style of player normally attributed to his brother Cody.

So what’s wrong with Caleb Martin? Maybe nothing. Maybe college basketball is adapting to Martin’s style of play and the target on both his and Nevada’s back does not help. It’s possible Martin is too into his own head. Martin had higher expectations than any Nevada player ever coming into this season.

There is also one added possibility — Martin is not really playing bad at all. Martin, along with Caroline, was named to the midseason watch list for the Wooden Award honoring the best player in the nation. Even with his struggles he is still viewed as one of the 25 best collegiate players in the country this season.

The easiest solution for Martin, and Nevada as a team, to put an end to recent struggles is to play like they do in the second half of games but for an entire 40 minutes. It would quiet a lot of whispers surrounding the players and the program, but is easier said than done. 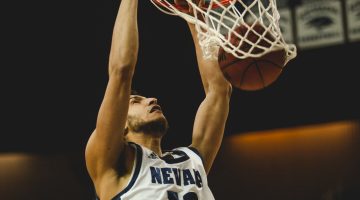 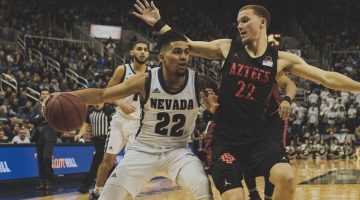 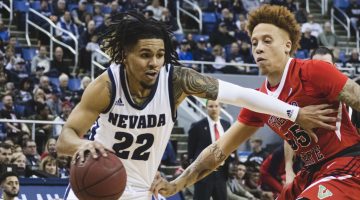