The Den to replace Howler Village, Overlook by mid-November

Students at the University of Nevada, Reno, can expect a new dining experience as soon as November of the current semester.

Currently, students who live in residence halls can use their meal plans at Howler Village and the Overlook Eatery. Howler Village was set up after an explosion occurred in Argenta Hall on Friday, July 5, damaging the Downunder Cafe, the former on-campus cafetería.

In response, the university and Nevada Dinding implemented a two phase project to provide students with dining options on campus. Howler Village is the first phase of the new dining systems on campus, but is temporary and will be dismantled by the end of the fall semester. The second phase will implement a semi-permanent structure located outside of the Overlook Eatery called The Den.

The semi permanent building is expected to have air conditioning and provide a better dining experience for students, according to Nevada Dining Marketing Director Heidi Rich. The Den will replace the Overlook and Howler Village and become the main dining location for students with meal plans.

Rich said the facility will provide students with more options to personalize their dining experience.

Rich added the university and Nevada Dining are working quickly to ensure the facility is up before there are drastic changes in weather. She said the facility is expected to be up by mid-November.

Originally the university was expected to use a facility from Emory University, but due to the space allocated for The Den, a modular facility was purchased.

“It’s basically like a modular school room or home,” Rich said. “The walls are already prebuilt, so the walls will go up and everything will go inside. And once Argenta opens back up then all of that will just basically be pulled apart. Kind of like… magnetic blocks.”

After the area is done being used, the university hopes to either use the facility in other locations on campus or send to other universities if needed.

According to Rich, efforts will go back to reconstructing the Downunder Cafe after The Den is built.

“Next steps would just be to work and put all the focus back in to Argenta,” Rich said. “Just kind of making sure [the Downunder Cafe] gets a refresh and remodel while it’s all being rebuilt.”

Despite attempts by Nevada Dining to accommodate dining options after the Argenta explosion some students are dissatisfied.

“[Howler Village is] really a hit or miss,”Muja said. “Sometimes Howler has amazing food, such as the one day they had steak vouchers for each swipe, or the bratwurst and hotdogs grilled out front. Other days the food will literally be limited to deep fried onion rings, cheese sticks, cereal and the usual desserts. That’s mostly on the weekends however, and adding onto the fact that [Howler Village is] closed on Saturday, plus the other meal trade places being closed most of the weekend, dining options are really limited during the weekends.”

Muja said despite The Den coming, he wishes the university would better allocate funds.

“I’d prefer they use their money on better things like fixing the [Wolf Pack Tower] wifi,” Muja said. “Most students are just going to stick to the Overlook, let’s be real here.”

In a recent report by The Nevada Sagebrush, students expressed concerns around the lack of allergy-safe, vegetarian and vegan options being offered at Howler Village.

Rich said despite transitions made before the semester started, Nevada Dining aims to provide a quality dining experience.

Construction of The Den is taking place in the lawn area between the Jot Travis and Thompson buildings, in front of the Overlook Eatery.

In a statement posted by the university, construction equipment and personnel will be accessing the construction site on the northwest end of the lawn and walkways north of the site will be closed till the facility is built.

“A flagger will be in place to maintain vehicle and pedestrian safety at the northwest end of the lawn area,” the statement read. “There will be intermittent noise and dust associated with this project. The main entrance to Lincoln Hall, the William N. Pennington Student Achievement Center, and the Thompson, Jot Travis, and Frandsen Humanities Buildings will remain open during construction.”

The statement also said no accessibility routes will be affected.

Renovations for the chemistry and Leifson Physics Building are expected to be finished by Saturday, Nov. 2.

Both buildings are being renovated to include modernized classrooms, research spaces, better ventilation and fire-sprinkler systems.

In a prior report done by The Nevada Sagebrush, construction of the facility was pushed back due to finding locations to place faculty and classes.

The chemistry building is expected to expand by 1,778 square feet and Leifson Physics will expand 839 square feet.

As construction takes place, the university is advising that students and faculty follow posted signs and be cautious of construction equipment and any activity that may be taking place during the day.

Andrew Mendez can be reached at andrewmendez@sagebrush.unr.edu or on Twitter @AMendez2000

Next post Jazz Lab Band I brings a stellar sound 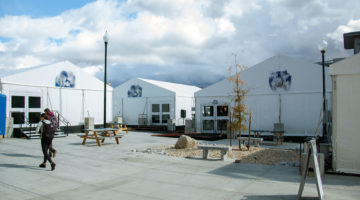