The University of Nevada, Reno’s Search Committee currently searches for a new Chief of Police and Associate Vice President for the UNRPD. In an email sent to faculty and staff, the committee announced the two candidates for the position as Terence Calloway and Todd Renwick.

Terence Calloway currently works as the Assistant Vice President of Safety and Parking Services, as well as Chief of Police at Florida Agricultural and Mechanical University in Tallahassee. Calloway has served in these positions since July 2014.

Todd Renwick is UNRPD’s Interim Assistant Vice President and Director. He previously worked as the Associate Director for UNRPD until February 2019.

According to a report from The Nevada Sagebrush in February 2019, Adam Garcia resigned from his position as Chief of Police at UNRPD. Garcia began his new role as Associate Vice President and Director for the Southern Command of Police Services at the University of Nevada, Las Vegas. Garcia served as these positions for UNRPD for 17 years.

Chief Calloway and Interim Assistant Vice President and Director Renwick were asked to appear for campus meetings and open forums at which they would speak and present their ideas. Calloway presented at an open forum on Wednesday, Nov. 6, in the Graduate Student Lounge on the third floor of the Joe Crowley Student Union. Renwick appeared in the same location on Thursday, Nov. 7.

The university encouraged faculty and staff to attend these forums and ask the candidates questions relating to the position.

“I care about members of the university,” Interim Renwick stated during his forum. “[…] My five-year goal is to continue marching on, continue building trust, continue communication with [faculty], students and staff. […] I want people to know that when you’re here or on one of our campuses you’re going to get service. […]”

According to Interim Assistant Vice President and Director Renwick’s CV, in his time in his current position, he provided internal event security for many university-affiliated groups such as the Associated Students of the University of Nevada, Student Services and Athletics. He also implemented a Police Services substation at Wolf Pack Tower five blocks from the main campus. In his past role as Associate Director, Renwick helped the university and the Center of Substance Abuse Technologies secure a $300,000 Office on Violence Against Women grant to improve violence prevention programs on campus.

According to Chief Calloway’s CV, he ensured public safety in a community of 25,000. He states that he developed and implemented monthly in-service training and a successful format for 12-hour work shifts. Chief Calloway was awarded Officer of the Year in 2003 for Warrensville Heights Police. He was granted Chief of the Year in 2015 for the State Law Enforcement Chief’s Association. Calloway has also been involved with the Federal Bureau of Investigation National Academy Association from 2011 to the present day.

The two candidates have both received training from FBI Law Enforcement, as well as receiving higher education. Interim Assistant Vice President and Director Renwick holds a Bachelor’s of Science in Business Management from the University of Phoenix. Chief Calloway holds a Bachelor of Arts in Criminal Justice from David N. Meyers University and a Master’s of Science in Justice Administration from Tiffin University.

The decision for Chief of Police and Associate Vice President of Police Services is still to be determined. More information can be found at https://www.unr.edu/police.

UNRPD hosts Coffee With a Cop to connect with students, gain insight on campus issues 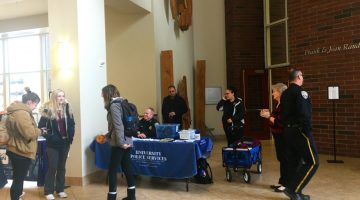 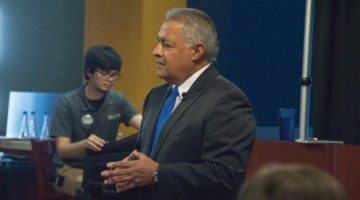