During the Desert Research Institute’s press conference at the American Geophysical Union in San Francisco, Calif. on Thursday, Dec. 12, the research group announced that they had discovered microplastics in the snow around the Lake Tahoe Basin.

The report on the DRI’s findings was authored by Julia Mae Davidson, Monica M. Arienzo and Zoe Harrold.

The findings are the first of their kind, as microplastics have never before been discovered in the snow around Lake Tahoe prior to this.

Microplastics are defined by the DRI as plastic particles less than five millimeters in size.

The research group made the discovery by collecting various snow samples from the Tahoe region and filtering the snow as it melted. Once the first level of filtration had completed, the team then filtered the contaminants into two groups.

The first group was comprised of pieces greater than 100 millimeters, followed by the second being divided by pieces ranging in size between 100 to 0.45 millimeters.

Once sizing on the contaminants was complete, they were sorted by shapes and colors.

The predominant contaminant found among the pollutants were microfibers. Microfibers are fibers that have a diameter of less than 10 micrometers.

Prior to the announcement at the AGU, the DRI announced that they had discovered microplastics in the waters of Lake Tahoe.

Ryan Freeberg can be reached at rfreeberg@sagebrush.unr.edu and on Twitter @NevadaSagebrush.

Previous post Fire breaks out near Arlington and Fifth

Thousands take to streets for Northern Nevada March for Science 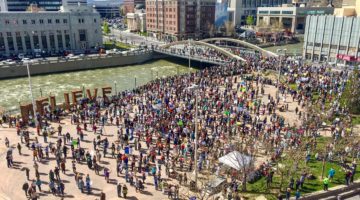 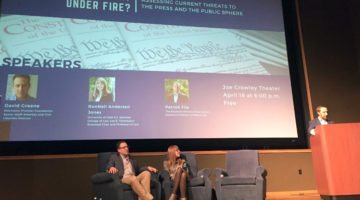 Voters skip over nonpartisan races in the general election