Local dance company, Collateral and Co., unveiled their new performance in the form of a short dance film on Friday,  Jan. 31 at the Nevada Museum of Art. Collateral and Co. collaborated with Tweaking Reality Studios, a filmmaking duo located in Reno.

Collateral and Co. focuses on contemporary dance accompanied by written word to express physical and emotional experiences and bodily expression. The company recently performed in Art Town, Sundance Books and Music and with the UNR Nevada Humanities program. In 2019, Collateral and Co. held their spring performance at the Nevada Museum of Art.

The short film “The Space Above” was introduced to a hushed audience as the lights dimmed in the museum theater.

Quiet music played while poetry, written by Valerie Padovani, was spoken and an array of dancers appeared on the screen. The short film explores the Nevada night sky from sunset to sunrise.

Six dancers are filmed through the desert in the late afternoon sunset, expressing various emotions through sharp and quiet movements. This unique style of combining music, poetry and dance seemed to move the audience as the film progressed. The film continues through the night and into the morning sunrise, creating a constant soulful climb using well thought-out choreography.

“I think we created something that the three of us and the dancers can be really proud of,” said Caitlin McCarty, the artistic director at Collateral and Co. McCarty commended her partnership with Tweaking Reality Studios as the film wrapped up the first part of the unveiling.

Tweaking Reality Studios consists of two young filmmakers who are local to Nevada. The company was founded in 2016 when James Coleman and creative partner Elspeth Summers started producing mini documentaries about artists local to Reno. They are driven by the artist community as well as Reno culture, and continue to build their business on the principle of consistency, producing professional work for many different Reno clients.

After the premier of the film, both companies opened up about the elements that were used to build the project.

The general idea of light and dark was used to convey raw emotion. McCarty’s main focus for her choreography highlighted how light worked through many different spaces and the physical space above our heads. The dancers showcased what happens in our minds, as well as how we react and grow from emotional events in life.

Another emphasis in the film was the idea of time. The archetype of the resting of the day, through the night, then the rise of the sun, was revered by the audience.

“As filmmakers, it’s a fluid process,” said Summers. “[We] just hash what is real, what is there, and what is authentic.”

Both companies expressed how many passionate artists delivered their best work to make this project a reality. The choreography was very powerful. The filming and editing was also of professional quality that showcased Coleman and Summers’ abilities.

It was Coleman and Summers’ first time filming dance. The uncontrolled outdoor environment added to the challenge of getting the perfect angles and lighting. “The Space Above” was filmed in October 2019 at Moon Rocks, located off of Pyramid Highway going towards Pyramid Lake.

Even with the difficulties of capturing dance without music during filming, both companies said they bonded in the desert space. Tweaking Reality Studios commented that they will continue to work with Collateral and Co. for more filmed pieces. They want to gain more experience with capturing different art forms in Reno, and this film is just the beginning of their diverse work.

Both companies’ mission was to not only create and produce this moving film, but to also showcase the vastness and beauty of Reno and the Nevadan desert. They wanted to display that work can be made in Reno. Good work exists to be seen by the local community.

“Reno gets a bad rep because it’s small, but that’s a better reason to create work,” said McCarty. “Reno has culture.”

A live follow-up performance from this discussion and film unveiling will be held at the Nevada Museum of Art on Feb 13, at 6:30 p.m. Tickets can be purchased at www.nevadaart.org

Emilie Rodriguez can be reached at ryleejackson@sagebrush.unr.edu, or on Twitter @emilieemeree.

Previous post We all have to lose sometimes, and usually that’s okay.

A German artist’s refuge in Nevada 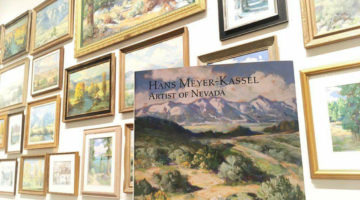