Nostalgia-heavy movies are a front for lazy cinema

Sequel or franchise movies have become a mainstay in the film industry over the past three decades, and the number of movies which are merely continuations or remakes of familiar franchises has dramatically increased. In turn, the number of films reliant on quality nostalgia has also risen over time. Franchise movies and sequels come in the forms of horrendous live-action remakes, sequels no one asks for or continuations of character stories nobody really cares about.

These “nostalgia-bait” movies parade themselves as being as great as the original movies. At best, the films are serviceable and at least enjoyable. At worst, the movies are incomprehensibly awful. Most of the time, the films are lazy and cannot stand on their own without heavy references to the source material.

Nostalgia alone can carry movies to a certain extent. It is easy to appeal to emotions rather than making a competent movie — but the practice is lazy and overused.

Avid fans can experience nostalgia intensely, but even people who were less invested will feel some emotional pull from revisited plotlines.

In a fairly recent theater-going experience with my brother to the newest “Ghostbusters” movie, I found myself rather unimpressed with the film as a whole. The plot was trite, and the film was accessorized in references to the previous “Ghostbusters” movies to create emotional weight. However, references to the source material do not work when a viewer does not know certain shots or lines are important references.

I felt nothing in my viewing experience.

My brother, on the other hand, loved the film and proclaimed it was his favorite movie of 2021. He found the film so enjoyable, he was willing to rewatch it.

The latest installment in the Marvel Spider-Man franchise was far from awful. Rather than being entirely reliant on references to the Sam Raimi and Marc Webb films, the film focused on fan service.

“Spider-Man: No Way Home” is not without its flaws, because it cannot free itself from the shackles all nostalgia-heavy films are tied down by. While watching “Spider-Man: No Way Home”, I was not expecting to feel the urge to clap like a vintage wind-up monkey with cymbals at the sight of previous actors I enjoyed in my childhood. I did not expect myself, a person who is critical of these types of movies, to overlook the lameness of crucial scenes for the sake of nostalgia.

It wasn’t until then I realized how powerful nostalgia-bait truly is.

The movie dangles a reference in front of fans, and fans take the bait. Production companies are aware the only viewers powerful enough to withstand its pull are the people who are not familiar with the source material — they’re not likely to watch the latest installment of a film series without having seen the previous ones. Nostalgia-bait is designed to entice invested audiences into superficially enjoying a movie by overriding critical thought with emotion.

With the commercialization of the film industry by large production companies, it is unlikely there will be an end to remakes or sequels when the movies generate millions of dollars on opening weekend. Nonetheless, audiences can demand higher-quality movies if society can learn to recognize when they’ve swum into the trap of childhood nostalgia.

Opinions expressed in The Nevada Sagebrush are solely those of the author and do not necessarily express the views of The Sagebrush or its staff. Jessica Cabrera is a student at the University of Nevada studying journalism. She can be reached at jessicacabrera@sagebrush.unr.edu and on Twitter @NevadaSagebrush.

Next post The NSHE vaccine, mask mandate overturn is a step back for Nevada

Jessica Cabera (she/they) is a second-year student at the University of Nevada, Reno majoring in Journalism with a minor in graphic design. After graduating, she aspires to work as a broadcast journalist. In their free time, they can be found listening to podcasts, practicing creative writing or reading. She can be reached at jessicacabrera@sagebrush.unr.edu or on Twitter @jessicabreras. 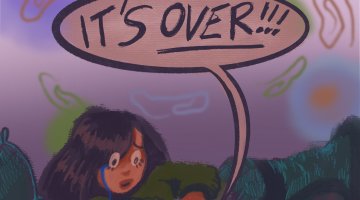