Photo by Kelsey Middleton. Nevada won one of four games against the University of Arizona.

Nevada baseball played four games against the University of Arizona and lost the non-conference series 1-3. The first two games were close, with only a one-run difference. Nevada stole the third game after Cam Walty had one of his best pitching performances of the season. Arizona swept the final game to win the series.

The first game of the series started on April 28 at 6 p.m. Nevada scored the first runs of the game in the second inning. Landon Wallace, Tyler Bosetti and Pat Caulfield had a run batter in singles that each brought in one run. Nevada led 3-0.

Arizona had strong sixth and seventh innings. They gained a total of four runs and took the lead 5-4.

Nevada tied the game 5-5 in the eighth inning after Wallace doubled up the middle and brought one run in. The men did not gain another run in the ninth, so Arizona got their last at bat. The bases were loaded, the batter walked and gave Arizona the one run needed to win the game at 6-5.

Just like game one, Nevada had the same three-run start to game two. In the second inning, Dario Gomez hit a double to left field and brought in Matt Clayton for run number one. Bosetti tripled to center field and Wallace scored. Ryan Jackson had a single to left field to make Nevada lead 3-0.

However, Arizona pounced on the Wolf Pack’s lead that same inning. It started with a two-run home run by Mac Bingham and a fielding error to tie the score at 3-3.

Nevada took back the lead at 4-3 after Jackson hit a groundout turned double play, but Wallace was able to score.

Arizona tied it again in the sixth inning at 4-4. They took the lead in the bottom of the eighth after an RBI single that brought in two runs and an RBI fly out that brought in one. Arizona led 7-4.

Nevada tried for a comeback but came one run short. In the ninth inning, Jacob Stinson hit an RBI fly out that brought one runner to home plate. Zamora singled to left and advanced to second due to a fielding error, allowing Caulfield to score. Nevada fell one short at 6-7.

Walty was in full control of game three. He pitched a three hitter, walked two and only allowed two baserunners to get into scoring position. He was named Mountain West Pitcher of the Week due to his performance.

Nevada won the game by scoring two runs in the first inning. Caulfield and Bosetti walked, but Caulfield was thrown out trying to steal. Zamora flied out to center field and Wallace singled to the right side. With two runners on base, Gomez hit a triple to right field and both runners scored. Nevada won 2-0.

The final game of the series was on May 1 at noon. Arizona took the lead at the beginning for the first time in the series.

It wasn’t until the fifth inning when Nevada put a run on the scoreboard. Dawson Martin hit a groundout, but Wallace was able to score. Nevada was down 5-1.

Arizona added three more runs in the sixth inning. One run was from an RBI single and two were from a homerun. Arizona led 8-1.

The Wolf Pack added one run in the eighth inning to finalize the score at 8-2. Caulfield grounded out, but Jaxon Woodhouse was able to score.

The men will travel to California to face Saint Mary’s College for a second time on May 3. The last time Nevada faced the Gaels, they won 13-3 at home.

Kelsey Middleton can be reached at kelseymiddleton@sagebrush.unr.edu or on Twitter @kelsmiddleunr

Kelsey Middleton (she, her, hers) is a sophomore majoring in journalism and minoring in photography. Sports have been something she’s loved her whole life from playing soccer, softball and volleyball. She aspires to be a reporter for any major professional sports league, interviewing athletes throughout a game. She can be reached at kelseymiddleton@sagebrush.unr.edu, Instagram at kelsfilm.pics or on Twitter @kelsmiddleunr. 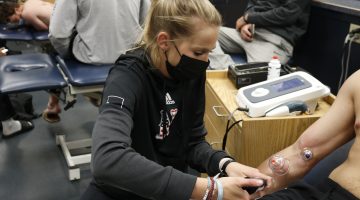