Researchers and mice work to save breasts

A mammogram and blood test to check for cancer cell markers every six months is 21-year-old Aubrey Mitchell’s reality. Her grandmother died of ovarian cancer at the age of 37, her mother passed away at 49 because of metastasis from ovarian cancer and her aunt was diagnosed with ovarian cancer followed immediately by another diagnosis of breast cancer. Due to this family history, Mitchell and her two sisters will be closely monitored for the rest of their lives.

The University of Nevada School of Medicine chair of pharmacology, Iain Buxton, is currently leading research directed at the metastasis (the spreading) of certain cancers, particularly breast cancer.

There are nearly 200,000 breast cancer diagnoses each year (mainly of women, although some men do get breast cancer) and around 40,000 deaths.

“What kills women are the metastases in their lungs, bones, brain and liver,” Buxton said. “Usually by the time the breast cancer is found, it has already spread elsewhere in the body.”

When women are diagnosed with breast cancer, the recommended plan of action consists of immediate chemotherapy and/or radiation after undergoing a lumpectomy, wherein the tumor is removed, or a mastectomy where an entire breast or both are removed.

Recent trials in mice have shown that leaving the primary breast cancer tumor in place prevents the metastasis of cancer throughout the mouse.

Lauren Huneycutt /Nevada Sagebrush
In the basement of the Center for Molecular Medicine,
lab mice are housed and cared for. In this group of
mice, the breast cancer tumors are visible on their
stomachs.

Researchers looked at groups of mice that were infected with human strains of breast cancer. In one group, the mice lived with the tumor until they were put down at 16 weeks. In another group, the tumor was removed after it became small and visible, as would happen in a person, and the mice continued the 16-week period without the primary tumor and were then put down.

As a result, researchers occasionally found a tumor in the lungs of the mice that kept the primary tumor. But in the group that had the removal, metastases filled the lungs of the mice. According to Buxton, these findings give reason to believe that an original breast tumor in some cases should be left in place on a woman.

“This has lead us to think that the primary tumor secretes a substance that suppresses the growth of distant metastases,” Buxton said. “There are several factors that have been identified, that show (these secretions) suppress the growth of the kind of cells you need to get a blood supply. Without a blood supply, a metastatic tumor cannot grow.”

Because of these findings, Buxton and his research team are now working to create a therapy that would stop a cancerous cell, already at a distant sight from the original mass, from getting a blood supply and being able to grow.

“If we can do that, all breast cancer would be is a procedure to remove a lump in the breast and a therapy to prevent any cells that had moved,” Buxton said. “That would be huge.”

Buxton acknowledges the obvious: Mice and humans are drastically different and the research has a long way to go. There are many variations of breast cancer and unique complications that can arise, but progress in research is being made.

“My mom had ovarian cancer that went to her colon, stomach, spleen and liver,” Mitchell said. “It spread everywhere, so I love hearing about science like this.”

Lauren Huneycutt /Nevada Sagebrush
The mice are x-rayed frequently to track the severity of their cancer. The x-rays allow researchers to see the
primary tumor and record changes and metastases over time.

Lauren Huneycutt can be reached at lhuneycutt@sagebrush.unr.edu. 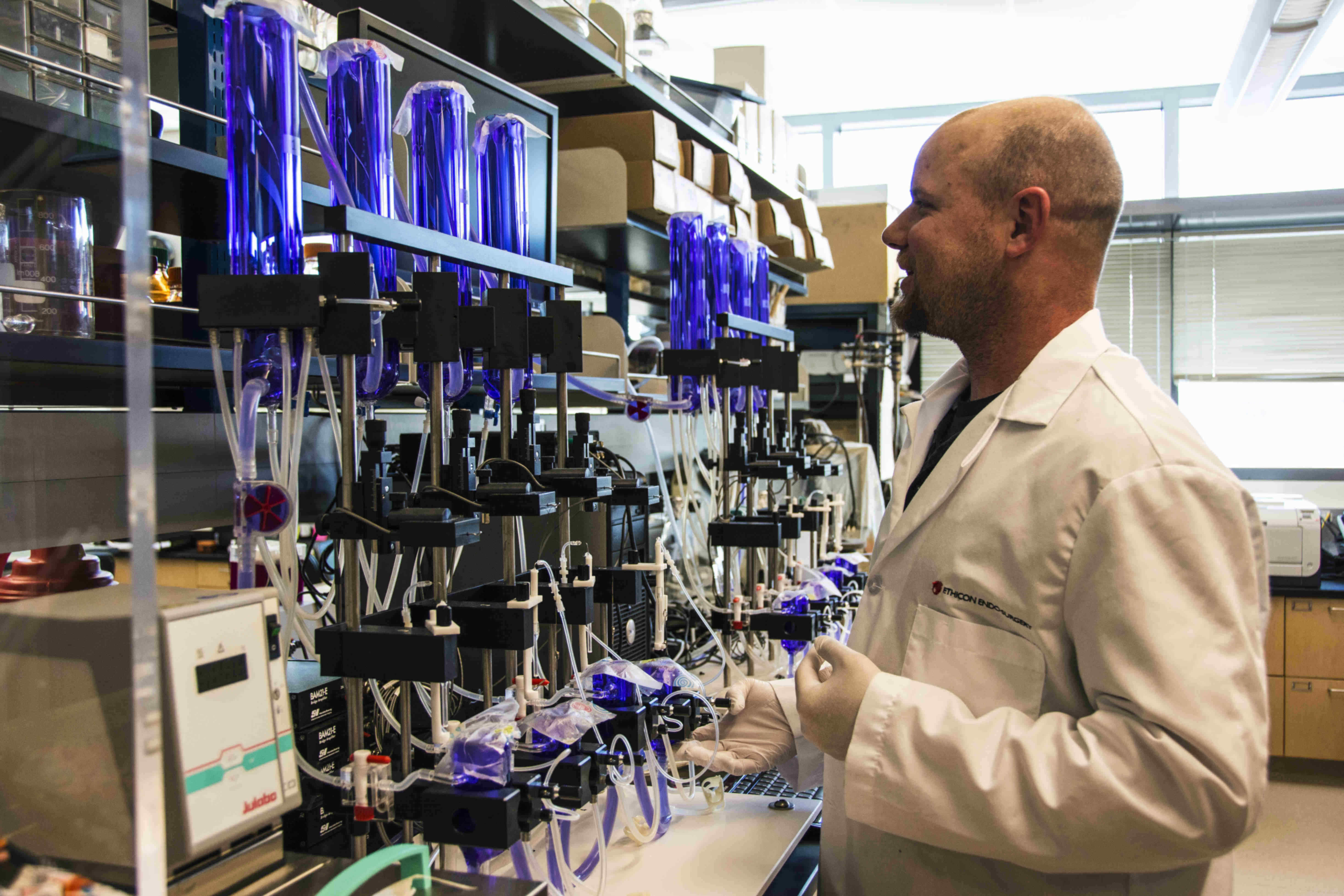