STUDENTS get in free with ID

The University of Nevada’s boxing team has been around the block. The program first came to life in 1928 and has been a top tier competitor for decades. With three-time National Champion Garrett Felling graduating and stepping out of the ring for Nevada, all eyes turn to Zack Smith as the leader of the team going into their first bout of the season against Air Force.

Smith is the most experienced fighter in the gym at this point. He’s been pegged for a national championship for a few seasons, but hasn’t been able to turn that dream into reality. But even with Smith’s plethora of experience, he is already facing some early adversity.

“It was right after nationals,” Smith said. “I decided to do the run at the beginning of June. I did this intense downhill run and the impact was just too much for my knee. It hasn’t improved, now it’s just getting worse and I might not be able to fight.”

The loss of Smith for possibly the next two fights can be a tough blow for Nevada, but his hopes are to come back stronger than ever and dominate in regionals and nationals.

Along with Smith, Nevada’s roster features three more returning fighters in Nate Strother, Dillon Maguin and Dustin Congdon. with their trips to nationals, both Strother and Congdon now have a great deal of boxing know-how. Maguin did not get that far last season, but has been in the gym all summer and is what head coach Dan Holmes likes to call a “game day boxer.”

With Smith being the most experienced of the bunch, he has a bit more insight in to who he thinks could be a class act.

“More than anybody I see Nate [Strother],” Smith said. “His boxing is improving more than anybody else’s. Every time we take the summer off he comes back with a new style a new technique.”

Strother is making all the right moves at this moment so he can make it farther then ever before in hopes of reaching the promised land. But Strother isn’t the only bat out of hell Nevada has on its roster. Congdon’s semi-finals loss to an unknown army fighter stung, but he knows what needs to get done.

“To come a match short of a championship is tough, but I don’t think I left many loose ends last year,” Congdon said. “I just have to finish the job.”

Congdon has an immense amount of potential as a sophomore that was already within striking distance of a national championship. Holmes sees Congdon’s potential as well.

“He’s just tough as nails,” Holmes said. “He lost a close decision to a navy fighter here in a duel meet and went back to nationals and stopped him within a minute of the first round. He’s got a little nasty streak to him and doesn’t like to lose.”

With four returning fighters on the team, Nevada boxing has a rookie boxer debuting this Thursday as well in Eden Steele. Steele is a natural according to coach Holmes and shows a lot of promise. Although he may not have much boxing experience, Steele is a fighter through and through.

“Originally I started boxing because I wanted something for my life,” Steele said. “I wanted something where I could defend myself in a real situation. I used to do martial arts when I was younger. I did taekwondo and karate.”

Steele was brought into the fold by former two-time National Champion JJ Mariano, so there’s a lot of truth behind him being a gifted boxer from the jump.

Nevada boxing’s winning tradition will be put to the test this Thursday, Oct. 19, at 7 p.m. at the Circus Circus Casino.

Next post Booth wants cap career on a high note 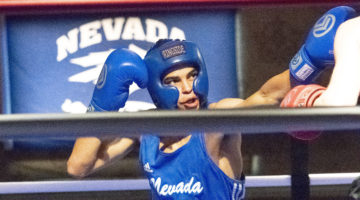 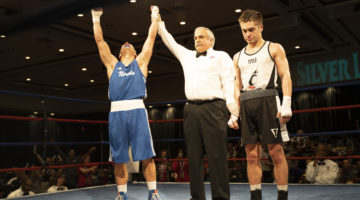 Boxing dominates in return to Reno 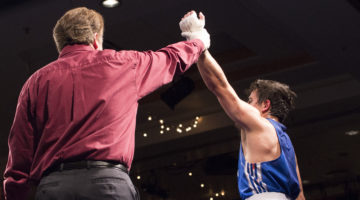