A Q&A with Lydia Night of the Regrettes

If you are hanging around Reno for spring break, bummed out as you look at your friends’ Instagram posts from Cabo and Panama City Beach, go out and see an awesome show. The Regrettes play at the Holland Project on March 18.

The Regrettes turned the punk world on its head last year with their debut “Feel Your Feelings Fool!” The album featured killer riffs and motown pop sensibilities, garnering millions of streams on Spotify. The band also released an EP this year entitled “Attention Seeker,” featuring hit single “Come Through.” I was able to speak with frontwoman Lydia Night before they headed out on their west coast tour.

What sort of preparation goes into starting a tour?

This one is really easy because it’s just a 10 or 11 day west coast tour. I’m bad; I don’t really prepare at all … Before, when I was in school — I just graduated high school — I had to plan with my teachers exactly what I had to bring with me and how much work I needed to get done on the road. But now it’s a lot easier.

Have you ever been to Reno before?

I don’t think I have.

Do you have any preconceived notions about it?

No, I honestly know nothing about Reno. Do you have any suggestions of places to go or things to avoid?

How do you feel about playing at Coachella this year?

I’m very, very excited. I think it’s cool because a lot of these festivals lack female artists or bands. So, I’m excited to be one of these people apart of a female-fronted band that can start changing that.

Is there anyone you’re particularly excited to see this year?

I’m very excited for Beyonce and Cardi B. I love both of them. I think they’re fucking badass. Also SZA, I love SZA. I’m really excited for Angel Olsen and St. Vincent. I love them. I’m also excited for Portugal. The Man. They’re really good live.

Can you rap any Cardi B?

Yeah, but not now (laughs). In the privacy of my shower.

Can you talk about the writing and recording of your new EP Attention Seeker?

“Red Light” was the song that was first written. That just kind of happened naturally in a rehearsal one day with the full band. We were messing around with this guitar riff. Then a couple months later, I was in the studio hanging out with Mike our producer and I was ranting about this guy and he came up with this riff and we wrote a song and it turned into “Come Through.” And it’s funny because they’re actually about the same person, but two very different times.

So if you’re dating someone and you write a song about them, are they flattered? Upset?

I usually make it pretty hard to tell. I’m not trying to make it too obvious, because I don’t want to put someone on blast like that. Unless I do want to put someone on blast and I will make it a little obvious. I’m not the type of person who writes a song and is like “Hey I wrote this about you.” I think that’s a little weird. So I just write and put it out, and sometimes people figure out what’s it about and sometimes they don’t.

Does being in a popular band which tours have a strain on your relationships?

Yeah it does for sure. It’s hard in all kinds of relationships. It’s hard with friendships because a huge part of being someone’s close friend is being there for them and when you’re physically not there half your year, it’s hard to do that. I’ve gotten a lot better about balancing out that stuff. My friends have gotten used to it. With dating, it’s really hard. I’m kind of in a place where I’m not wanting to date at all for a long time because it’s really hard finding a balance with someone who isn’t too clingy and can’t handle me being independent and being gone a lot. But then also you don’t want someone who doesn’t care at all about that. So it’s tricky finding a balance.

Can you talk about the song A Teenager in Love?

“A Teenager in Love” is a classic Dion & the Belmonts song. It’s a song I actually used to cover back when I had a band when I was like seven. I love that song. It’s the song I never get sick of, which is rare for me. I get sick of music pretty fast. It’s just a timeless song. It felt kind of fitting, because I’m a teenager and it made sense to me.

What’s the last song you got obsessed with?

Probably “The Way I Feel Inside” by the Zombies. Now I’ve gotten better at it and I’ve learned to pace myself. This band Calpurnia released their first single and it’s actually so good and it’s called “City Boy.”

What else have you been listening to lately?

I’ve been listening to a lot of Exploding Hearts. I’ve actually been going back and listening to a shit ton of Fleetwood Mac. A lot Blondie. A lot of this band the Beat, they’re really good. And the Jam.

What inspired you to release acoustic versions of Hey Now and A Living Human Girl?

I just always enjoy when a band puts out an acoustic version of a single … It’s a totally different mood and it really accentuates a lot of things you don’t hear in the regular recording. So I thought it would be nice to give that to our fans and listeners.

What are you looking forward to?

Just continuing to tour in new places and also visit places that we’ve been touring in and watch the audiences grow and meet more people. And just experience new things. 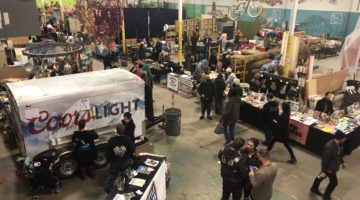 Night Rooms “Is” Sad but Funky 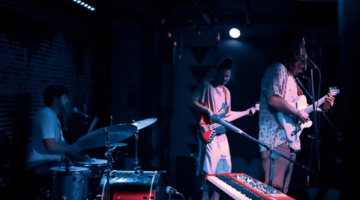 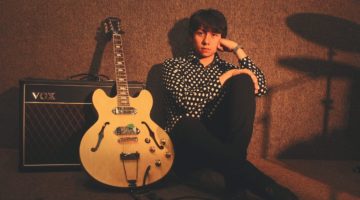