Every great musical features a pivotal song of epiphany, where a character comes to crucial revelation which sets the rest of the show in motion.

All of the songs performed come from contemporary musicals (1995-today). This was a conscious decision by “Turning Points” director and UNR’s new Assistant Professor of Theatre Gavin Mayer.

“One of the things that I saw that I really felt that the students needed to work on was honesty,” Mayer said. “If you do anything before contemporary, then you’re working more in a sense of style. I just wanted to focus on pieces where they could be authentic, be real, be honest.”

Rehearsals took six weeks. After the casting process, performers collaborated with the director on which pieces to select. Each number in the show is a song where a character “makes a decision, an admission, gets and idea or discovers something about their lives.” Matt Denney, a student at UNR, performed in the show.

“The most difficult thing is communicating,” Mayer said. “If you have a cast of 20 people, then you have to find 20 different ways to communicate, because you have to get to know your actors one on one. That’s the biggest challenge, because you usually have a really short rehearsal time. You have to figure out how the work, what vocabulary do you use with them in a very truncated amount of time.”

The stage in the Redfield Theatre featured a grand piano and a tasteful backdrop of string lights which would change colors depending on the song. Some actors would bring out props. The production moved along quickly: as soon as one song would end, another performer would come out of a different corner to begin their piece.

Bethany Haspel kicked off the show, debating materialism and romance in “Moon and the Stars” from “Songs for a New World.” Sarah Morris daydreamed while rolling dough in “When He Sees Me” from “Waitress.” Denney played a delightfully creepy stalker professing his love to Claire in “To Excess” from “Homemade Fusion.”

Denney had the piece in his songbook for a while, first learning about it in high school. He did not originally choose it as one of his performances. Only after he mentioned his love for the song in a meeting with Mayer did the director pick it for him.

“In preparation for it, Gavin really helped me understand that my character is a little insane, but he actually loves Claire and he thinks that this is all normal, and he is proving himself to Claire,” Denney said. “I spent a lot of time with Gavin taking it in line by line and breaking down his thoughts and the reason about ‘Why’ he is saying the things he is saying to Claire. He shows his love in an interesting way, but when it all comes down to it, my character loves Claire.”

Haley Passione sang sweet nothings from a ladder to Trenton Jackson in “If I Told You” from “The Wedding Singer.” Jason Pitak stalked the stage singing “Who I’d Be” from “Shrek.” Pitak is truly masterful at his craft and has a presence reminiscent of Philip Seymour Hoffman.

Thomas Chubb aired his existential quarter-life grievances while puffing a cigarette in the title track of “The Bad Years.” Sarah Morris and Emillio Mata danced around an awkward first date in “Stud and Dade” from “I Love You, You’re Perfect Now Change.” In a drastic change from his first piece, Denney sang the tear-jerking ballad “Laura, Laura (I’m Sorry)” from “High Fidelity.” A long time fan of “High Fidelity”, he chose this piece because the main character always intrigued him.

“When I first heard this song, I could not stop crying because of how real the dialogue was along with the beautiful music,” Denny said. “It was a song I could connect with and add my own spin to it. It’s a song that is relatable to so many people. To prepare, I called on my own experience and took it line by line to really try and find the emotion in the song.”

Thomas Chubb hogged the spotlight from Sam Crabtree in the hilarious duet “You and Me (but Mostly Me)” from the Tony Award-winning musical “The Book of Mormon.” The entire cast gathered on the stage to laugh about the word Acouchi (noun: a type of rodent from the Amazon basin) before Pitak performed an avant garde spelling in “I’m Not That Smart” from “Spelling Bee”. Haley Passione performed a stirring rendition of “One Perfect Moment” from “Bring It On”.

Abigail Rosen and Adelynn Tourondel delivered intense acting during their performance of the title track from “Dog Fight.” Rachel Smith swayed and jerked across the stage during “Pulled” from the “Addams Family” as she discovered she was in love.

The male cast members joined Camden Mauer in their short-sleeved white button downs and black ties for a rousing display of the revelatory “I Believe” from “The Book of Mormon.” The section featured some killer choreography. The whole audience cackled as the men stomped and fervently pointed to the front row for the line “I believe that Satan has a hold of you!”

“It was a great bonding song for the guys, and we made the choreography collaboratively with Gavin,” Denney said. “Gavin had an idea of choreography, but it shaped into something that we made together as a group. It was always so fun to be in a number with the guys in the show, especially as Mormon characters.”

The show ended with the inspirational “You Will Be Found” from “Dear Evan Hansen” with the entire cast led by Sam Crabtree.

“I think in any theatrical performance, regardless of it’s farce, if it’s Shakespeare, it has to be layered on a foundation of truth and honesty,” Mayer said. “Then the style layers on top of that.”

Mayer is currently planning the musical for next spring as well as a musical theatre major.

Review: “The Cake” is a sweet portrayal of morality and love 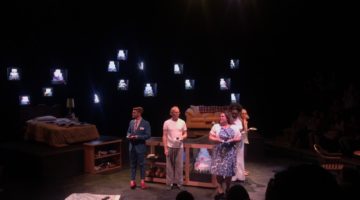 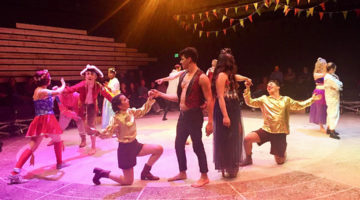