The Tau Kappa Epsilon house as it stands on Monday, Nov. 5. The university placed the fraternity on probation after a discovered document led to an investigation.

The University of Nevada, Reno, announced on Friday, Jan. 18, the Pi Iota chapter of Tau Kappa Epsilon would be placed on university probation among other sanctions after a document belonging to the fraternity was found containing songs depicting violence, drinking and sexual assault.

The Office of Student Conduct placed TKE on University Probation until January 22, 2022. In addition, the fraternity lost privileges such as hosting events and activities until January 2021. The fraternity is also not allowed to recruit until December 2019 and must complete “discretionary and educational sanctions”.

The chapter can accept the university’s decision or request a hearing.

“Tau Kappa Epsilon has 10 days to accept the resolution,” according to a statement from the Office of Student Conduct. The organization ‘may accept this decision or request a hearing in front of a Student Conduct Hearing Board or Hearing Officer.’ The hearing process would follow the procedure stated in the Student Code of Conduct, Section IV. B. 5.”

After the document was found in the Mathewson-IGT Knowledge Center on a university computer, the document was taken to both the Office of Student Conduct and the Tau Kappa Epsilon national organization. The investigation was initiated on Tuesday, Oct. 30, 2018.

The national organization of the TKE fraternity worked with the university through the investigation and is supportive of the decision, according to the university’s statement.

“Tau Kappa Epsilon’s national office is supportive of the University’s sanctions and will work with its Pi lota chapter to comply,” the Office of Student Conduct said. “Failure to comply with the outlined sanctions can result in chapter’s loss of recognition by the University.”

The Nevada Sagebrush News Desk can be reached at oali@sagebrush.unr.edu or on Twitter @NevadaSagebrush. 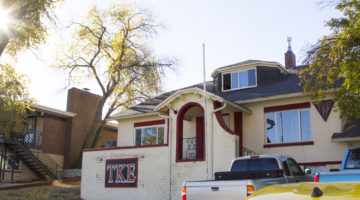