The meeting took place in Wolf Pack Tower. ASUN President, Anthony Martinez, RHA President, Serena Fenn and Director of Campus and Public Relations for ASUN, Kristen de Guzman led the meeting. Approximately fifty students attended the event. They broke up into four different groups, one for each topic of discussion.

De Guzman stated in regards to holding the town hall meetings for students, “[…] this is a common to encourage everyone to join us in leadership and helping us enact the change we would all like to see in our living, learning community.”

Students in this group discussed the two UNR students setting fire to an LGBTQ flag. Some students expressed how seeing the tweet made them feel unsafe.

One student said, “I knew one of the people and it was very shocking. [It’s] sad because you don’t expect it […].”

The recent swastikas drawn inside Wolf Pack Tower and Church Fine Arts prompted the presence of the discussion topic. A few students spoke out in the group, stating that they were Jewish and were outraged.

One student stated, “[…] The fact that we have had eight swastikas…I have never been to another school that has had that.”

Students addressed the increase of groups on campus, including the American Identity Movement, Turning Point USA and Young Americans for Liberty. Students stated that these groups made them feel uncomfortable. A few students said that they had been harassed by members of these groups.

Experiences of racism and prejudice on campus

The group discussed their personal struggles in dealing with racism on campus and shared stories. They also talked about the university having a majority white student body with 60 percent. Many students suggested solutions for combating racism by opening more dialogue and having opportunities to educate their fellow students on the topic of race.

RHA President, Serena Phen, stated in regards to the increase of recent events on campus, “You should be able to vocalize what you believe in… however what I don’t stand for and what my organization doesn’t stand for is creating hatred and bias and making someone feel uncomfortable…”

When asked why a discussion-based meeting was the most effective, ASUN President, Anthony Martinez stated, “[…] Students want to be heard […] They want to talk to us to our faces about what they don’t like and what they do like. And we have taken a step further to hopefully have action with that […] We want to actually do something for them.”

Next post Panel held to inform community, discusses UNR as an emerging HSI 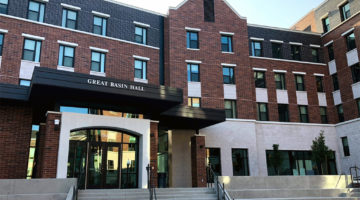