The annual drag show put on by the Queer Student Union and ASUN is always one of the most anticipated events of the year due to its celebratory nature and high energy. Students and other attendees have the incredible chance to witness all the talented local drag queens, kings and performers compete for the crown.

Within the last couple of years, queens from “RuPaul’s Drag Race” fame have hosted the event—blessing the audience with hilarious monologues and show-stopping performances. In 2018, Trixie Mattel gave us an iconic acoustic rendition of Avril Lavigne’s “Sk8er Boi,” which she deemed as an American classic. Right off from a whirlwind year with her appearance in “A Star Is Born,” Shangela interacted with the crowd during her performance of “Uptown Fish” in 2019.

Now it’s 2020 and another drag show is approaching. Although this year’s special guest hasn’t been announced yet, it’s fun to come up with a list of legendary queens that should host. In no particular order, here are five impactful queens that should stop by campus either this year or in future years.

Known for her undeniable impact within the Stan Twitter lexicon and the Internet in general, Masters competed in both season seven of “RuPaul’s Drag Race” and season four of “RuPaul’s Drag Race All Stars.” Recently, a clip of her saying “And I Oop” from a 2015 YouTube video blew up and skyrocketed into one of the most popular memes of last year. Her impeccable comedic timing and viral catchphrases alone would be amazing to see from a host.

This Brooklyn queen set the Internet and “Drag Race” fans ablaze throughout the season nine finale when she pulled her wig off to reveal an abundance of rose petals during a “lip-sync for your life” to Whitney Houston’s “So Emotional”—securing the crown. Embodying a theatrical style of drag, Velour has utilized projection mapping in her recent solo performances, which is next-level kind of stuff.

Since her appearance as the runner-up on the ninth season, this New York City queen has heightened her role both as a performer and activist. In 2018, she became the first trans woman to originate a principal role on Broadway as the role of Pythio in the musical “Head Over Heels.” Peppermint was also recognized as the ultimate “lip-sync assassin” of Season 9, so you best believe she would give us a show.

Much like Shangela, Luzon has competed on “Drag Race” three times—appearing on both the regular series and “All-Stars.” Manilla is best known for her fun style and memorable runway looks, so she would definitely deliver in that department. Who could forget her famous pineapple dress or her glamorous spaghetti and meatball gown?

Alongside Trinity “The Tuck” Taylor, Monét was a part of the historic double win in the fourth season of “All Stars.” During Monét’s first introduction to “Drag Race,” her first runway look—embellished with kitchen sponges—became her signature shtick and later developed into the inspiration behind her first single, “Soak It Up,” featuring Bob the Drag Queen. She also hosts a weekly talk show for BUILD Series called “The X Change Rate,” so we know she has some hosting experience.

This year’s drag show will be on Wednesday, Mar. 11 at 8 p.m. to 10 p.m. in the Joe Ballrooms. Follow @NevadaASUN and @qsuunr on Twitter for more updates.

Rylee Jackson can be reached at ryleejackson@sagebrush.unr.edu or on Twitter @rybyjackson.

QSU and ASUN team up for Drag Show 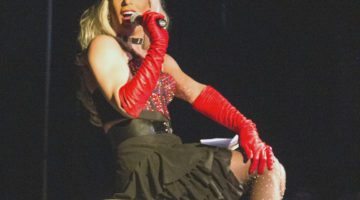