Breanna Denney /Nevada Sagebrush
Students of the University of Nevada, Reno pass a campaign sign for candidate Royce Feuer in Hilliard Plaza on Monday, Feb. 23, 2015. Signs for this year’s campaign will appear on Wednesday as the campaign process officially begins.

With the chilly arrival of February, the 83rd session of the Associated Students of the University of Nevada continues to draw steadily to a close. As such, ASUN election season has emerged from its annual hibernation as the election filing period officially closed last Friday. Now a record 50 candidates are set to hit the proverbial campaign trail on Wednesday in their effort to win one of 22 senate seats or a spot in the executive board as either president or vice president.

Between Feb. 23 and 25, candidates from all the colleges on campus will face off in senatorial debates while the executive board candidates meet for their own debate on March 1. Those debates are immediately followed by the primary election on March 2 and 3, which will narrow down the field for the general election on March 9 and 10. Receptions will be held following both elections to announce the winning candidates.

Voting for each election will be available online through WebCampus, or in person in the Blue Fish Bowl on the second floor of the Joe Crowley Student Union.

“I’m so excited,” said Dalton Mack, ASUN’s elections chair. “[The number of candidates] surpassed the goal I had; it’s great to see that students are getting involved.”

Mack also hopes that the record number of candidates will help boost turnout as well. His goal this year is 25 percent, 6 percent greater than last year’s relatively massive turnout of 19 percent.

Below are the candidates for each position, with senatorial candidates presented in the order they will appear in the debate schedule. Candidates for executive board positions will also include their current position within ASUN, if any.

College of Education (one available seat) 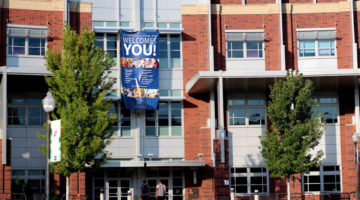