ASUN Election Guide: Polls set to open after a month of campaigns

It’s been one whole year, but the Ides of March have finally returned. They’ve brought both chilly weather and a brand new round of elections for the Associated Students of the University of Nevada.

While arguably less dramatic than the current presidential election, the ASUN elections still bear their own importance, as the Association maintains control of a budget of nearly $2.4 million, all derived from student fees in addition to profit from the Wolf Shop. This is on top of services such as campus escort and bodies like the Department of Clubs and Organizations, each of which falls under the purview of ASUN.

Last week’s primary elections whittled down the presidential field from four to two, this week’s general will cement all the elected officials for the 84th session (until someone resigns, but that usually happens later on in the session).

You can catch the final debate between these candidates on Tuesday at 7:30 p.m. inside the Wells Fargo Auditorium, itself inside the Mathewson-IGT Knowledge Center. Polls open on Wednesday, March 9, and close Thursday, March 10, at 5 p.m. Voting occurs on WebCampus, or inside the Blue Fish Bowl on the second floor of the Joe Crowley Student Union.

Below, the executive candidates will be presented in alphabetical order, along with biographical information and some notes on their platforms and statements made Sunday afternoon before the staff of The Nevada Sagebrush.

First elected senator for the College of Business just one year ago this month, Boone is a junior studying information systems. Just after his inauguration, Boone was elected by his fellow senators as chair of the Committee on Civic Engagement.

His platform has plenty of individual bullet points, but there are five general tenets: continuing the Campus to the City Initiative, advocating for students in meetings of the Nevada System of Higher Education Board of Regents, “enhancing and promoting” services that ASUN already provides, improving the areas of safety, sustainability and wellness, and fostering civic engagement on campus.

In his presentation to The Nevada Sagebrush, he covered all the bases on his platform, hitting on everything from the Campus to the City Initiative to parking on campus to increasing diversity. Boone touted that his running mate, vice presidential candidate and current deputy chief of staff, Jacob Springmeyer, complements his lack of experience in ASUN’s executive branch.

Crook, the current director of ASUN’s Department of Legislative Affairs, first got her start in the association as a senator for the College of Liberal Arts during the 82nd session in 2014. There, she worked on various projects as part of the committees on Government Operations, University Affairs and Budget and Finance.

Her platform is split in four parts, spelled out in her campaign motto: serve, lead, vitalize and reorganize. More specifically, Crook has said she wants to revamp the This is Nevada app as well as increase diversity within ASUN and partnerships between ASUN and professors to create service learning opportunities.

In her presentation to The Nevada Sagebrush, Crook emphasized creating an efficient ASUN, speaking in specifics on ways to cut spending and streamline the bureaucracy. This included plans to cut several assistant positions within various departments. These cuts would theoretically free up funds that could be used to expand the Pack Internship Grant Program.

Mathias, like his colleague Boone, first joined ASUN when he was elected to serve in the senate, representing the Division of Health Sciences. In his fourth year, Mathias is pursuing a degree in health sciences.

His platform has fewer specific promises than his colleagues, but he’s made promises nonetheless, vowing to work with the president to accomplish goals, ensure communication between departments, expand the Pack Internship Grant Program and to ensure that organizations within ASUN come together.

In his presentation to The Nevada Sagebrush, Mathias added some details to his plan, saying that he would work to get more businesses to participate in the Pack Internship Grant Program. He also noted a no-nonsense leadership style that he took from his time in ROTC.

Springmeyer, a veteran of ASUN, served as a programming intern and programmer proper before being promoted to his current position as deputy chief of staff. There, he works with ASUN’s external operations, like the Pack Friendly Business campaign and the Sustainable Nevada Initiative Fund.

In his presentation to The Nevada Sagebrush, Springmeyer elaborated on his plans for the Pack Internship Grant Program, noting especially that more local businesses need to be called by ASUN and convinced to join the program. Springmeyer also had a detailed plan to adjust funding for ASUN-funded publications based on readership and need (this does not include The Nevada Sagebrush, which is entirely self-funded).

Next post Reno turned up for ‘The Back to You Tour’

Previous post 'Stock up stock down' with Neil Patrick Healy 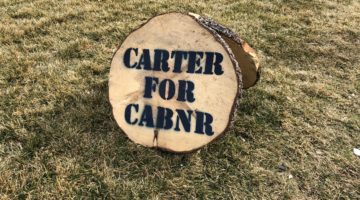