Last Friday, Nevada alum and San Francisco 49ers quarterback Colin Kaepernick refused to stand for the national anthem before a preseason game. He had done the same before the other two preseason games, but because he wasn’t dressed to play, no one noticed. This time, however, his action caused an uproar that has yet to disappear.

The incident has resulted in an outcry, from calling Kaepernick spoiled and whiny to attacking his actions, describing them as anti-American and anti-veteran. In what seems to be the tone of political discussion as of late, the ire drawn from Kaepernick’s protest has been tinged with racism and the threat of violence. Though this seems par for the course in the increasingly hostile political and digital environment, what fans and bystanders should look to understand in the situation is that the Nevada alum hasn’t actually done anything wrong.

Kaepernick isn’t setting a dangerous precedent. He isn’t being whiny. He isn’t fabricating problems or disrespecting veterans. Kaepernick is simply exercising the right he shares with every other American, and doing it to bring attention to what is one of the most pressing and persistent problems in this country. In a news conference Sunday afternoon, Kaepernick stated “This country stands for freedom, liberty and justice for all. And it is not happening for all right now.”

And he’s right. According to the most recent data, racial inequality in America continues to manifest itself in a variety of ways. According to The Washington Post, “black men were seven times more likely to die by police gunfire while unarmed.” Census data finds political representation to be sorely disproportionate, with non-whites constituting 17 percent of Congress while non-whites make up 38 percent of the overall population. According to Pew Research Center, the poverty rate for black children remained stagnant at 38 percent, while the overall rate of child poverty had decreased to 20 percent. This means that black children were “almost four times as likely as white or Asian children to be living in poverty in 2013.”

There is clearly an alarming level of inequality in this country, and Kaepernick should be applauded for using his platform to bring attention to them.

However, even some who support his position claim he went about making his point the wrong way. Kaepernick has given a clear answer as to why he does not believe this was the case. “I don’t see it as going about it the wrong way…it has to be brought to the forefront of everyone’s attention,” he said at the news conference. He further claimed that this will not be the last time he will behave this way during the national anthem. “When there’s significant change and I feel like that flag represents what it is supposed to represent,” he said, “… I’ll stand.”

Colin Kaepernick is not being un-American in his refusal to stand for the National Anthem. Instead, he is holding the flag and all those who live under its storied symbolism to a higher standard, and that just might be the most patriotic thing we’ve seen all year.

The Sagebrush Editorial Board can be reached at jsolis@sagebrush.unr.edu or on Twitter @TheSagebrush. 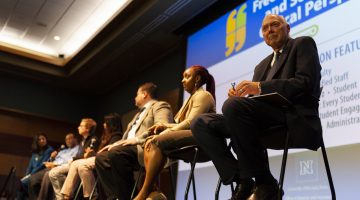 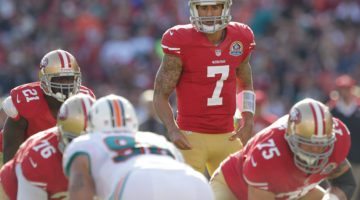 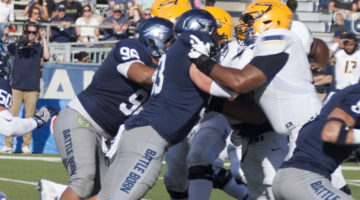