Ever since the Nevada Wolf Pack swept its interstate rival, UNLV, the talk of the town has been the regular season finale showdown against the Colorado State Rams. As the Wolf Pack took care of business against San Jose State last Tuesday, everybody in the Reno community—from students to local fans to government officials—turned their attention to last Saturday’s de facto regular season championship match.

“I had a family from Danville come over to watch us play,” Coach Eric Musselman said. “We went to dinner last night and it’s the first time since I’ve been here that I got claustrophobic. In the restaurant, you could feel the electricity building up for this game.”

The stage was set—it was senior night for Marcus Marshall and D.J. Fenner, the Mountain West regular season championship was on the line, and it was the third largest attendance in school history. For the fiery Musselman, who thrives on motivating his players through bulletin-board material, new uniforms, a new court design and even a Harlem Globetrotters style warm up, he could not have given his players any further motivation. On Saturday night, the Wolf Pack sat atop the Mountain West Conference tied with their opponent, Colorado State, making for a postseason atmosphere that not even the CBI Championship could live up to.

“For me, I’ve played in the D-league Championship in front of a hundred people and NBA environments coaching in Golden State,” Musselman said. “They sell out every game but there’s no passion like this and there’s not a student body when you pull up two hours before the game. They line up 100 deep and you get chills just pulling up into the parking lot so this is unique and we’ve got a community that’s rallied around this team and it feels special.”

As the senior day video of Marshall and Fenner played to the backdrop of Chance the Rapper’s song, Blessings, each person in the arena could feel the anxious anticipation of the magnitude of what was to come. For graduating players, senior day evokes bittersweet emotions coupled with the painstaking realization of what could be their final performance in Lawlor Events Center. Even the ever reliable Fenner and Marshall, who thrive in high-pressure situations, appeared to succumb to the gravity of the circumstance—at least in the first half.

“I thought that Marcus and D.J. especially, it’s a pretty emotional night for those guys and D.J. had mentioned to coach Dupree before the game that he had some angst,” Musselman said. “I think that’s to be expected. It’s a pretty emotional toll. It’s hard enough to play when it comes down to the last game of the season to play for a Mountain West Regular Season Championship and then you add in the fact that it’s senior night.”

“It was one my first times kinda that I had nerves like that,” Marshall said. “I actually turned to D.J. right before we started and said, ‘Yo, I’m kinda nervous.’”

The Rams, whose last two victories came via two buzzer-beating shots to preserve their chances at competing for a championship, seemed to have caught lightning in a bottle and carried the magical mystique that tournament bound teams usually possess. Led by Mountain West Conference Player of the Year Gian Clavell, the Rams brought their hot shooting into Saturday, hitting a barrage of threes in the first half to keep the explosive Wolf Pack offense at bay. Coach Larry Eustachy’s squad appeared to capitalize on the emotions of their opponents and fans, as they went on a 10-3 run late in the first half to extend their lead to 10.

While the spotlight may have been on the two seniors, Cameron Oliver, Nevada’s high-flying star who also could have played his final game at Lawlor Events Center as the possibility of getting drafted to the NBA looms, shined the brightest to help keep the Wolf Pack afloat. The sophomore standout was scorching from long range as he hit four three-pointers in the first half to mitigate the damage on the opposite end. Oliver helped spark a critical 11-3 run at the end of the half as he drained a three-pointer and a momentum-shifting and-one layup to shrink the Rams’ lead to two heading into halftime.

“Honestly, I think Cam should get 20 and 10 every game,” Marshall said. “This is no surprise to me, actually to anybody on our staff or anyone of our teammates. We know what Cam is capable of doing. Big time players make big time plays in big time games and that’s what he did tonight.”

Leading up to the game, Colorado State had an 18-0 record when possessing a halftime lead. If the intensity during pregame was immense, the second half took that up ten notches. Deadlocked at 49 through the first nine minutes of the second half, the Wolf Pack hit its groove as Jordan Caroline, Fenner and Marshall hit consecutive three-pointers to balloon the Wolf Pack lead to nine. With the three-ball being Nevada’s identity, the Wolf Pack was able to flip the script on the Rams and bring the rowdy Lawlor faithful to its feet.

In the succeeding possessions, Oliver stamped his signature performance with back-to-back thunderous dunks that stuck a dagger in the hearts of the visitors. His final stat line was one for the ages—29 points, 17 rebounds, two blocks and two steals. From this point onward, it was pandemonium inside the arena as the Wolf Pack smelled, grasped and did not let go of their first-ever Mountain West Conference Championship.

“I love it,” Oliver said. “As you guys could probably tell, I’m a real crowd pleaser. I like getting the crowd into a lot of things. Having them engaged is a great feeling to have. When we have the audience and the crowd into it, I know it shuts down the other team’s confidence a little bit. It’s a little secret weapon I got.”

As the final buzzer sounded, the only word to describe the 45-minute post-game celebration was “Madness.” Students were allowed to storm the court to partake in the cathartic festivities. Musselman ran rampant throughout the crowd as he paraded the championship shirt with his fist pumped in the air and a smile so bright only Fenner could match it. Everyone on the basketball staff from player to coach to manager cut a piece of the nets—a scene Wolf Pack fans are getting accustomed to.

“It feels great,” Musselman said. “I just told the team that the commitment that they have shown as student athletes—to put the time in in the summer. It’s an incredible feeling for them to be rewarded. I’m just so proud of what they go through from a preparation standpoint and we ask a lot of them and it’s been a long season for those guys.”

Musselman and his team love to revel in the spotlight and relish in their accomplishments. However, they are still just as hungry as they were at the beginning of the season. In the post-game press conference, with the championship trophy prominently displayed on the corner of the table, every single person acknowledged that this is just the beginning. The month of March has just begun and while the Wolf Pack has dazzled and endeared itself to the Reno community, it looks to step into a bigger and brighter stage as the campaign for the NCAA Tournament begins.

“I think it’s really important for us to just enjoy the moment because this is something that you can’t get back,” Fenner said. “I was just standing out there in front of the crowd before the game and after the game and I was just trying to take in as much as possible because it’s over. But, wake up next day, gotta look forward because like I said, ‘We’re not done yet’. Any loss could send us home for good and we don’t want that so we’re gonna go work hard and get ready to go.”

At least for this night, the stars aligned for the Wolf Pack as the perfect stage was set, the victory-starved community was brought to life and a conference championship was won. The gravity of this feat is historic in itself for a team that only amassed nine victories two seasons ago. The first goal of March is completed. What remains to be seen is how many more shining moments this team will have in them. From Arch Madness to March Madness, this Wolf Pack team is radiating with confidence as they compete for yet another championship in this week’s Mountain West Conference Tournament. 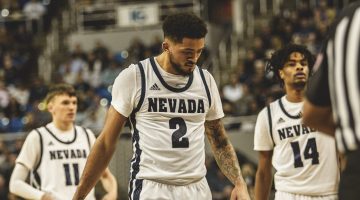 Steadying the ship: Steve Alford, the new captain at the helm for Nevada basketball 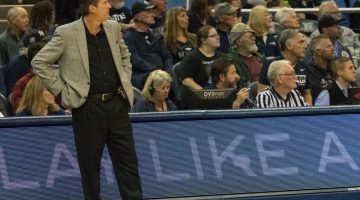