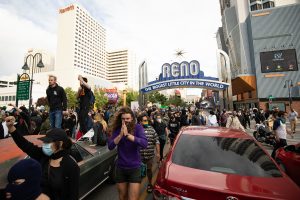 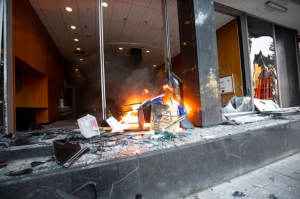 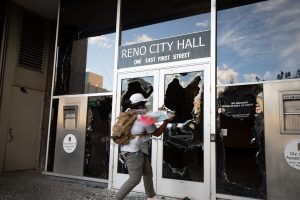 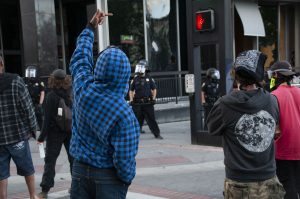 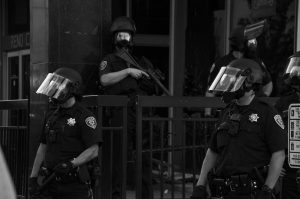 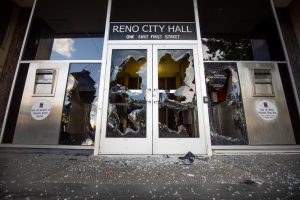 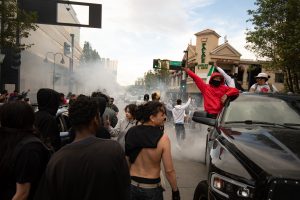 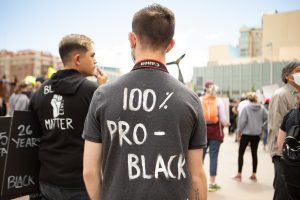 RENO—A large crowd set out in Downtown Reno on Saturday, May 30 starting around 2 p.m. to protest and rally in light of George Floyd’s death.

Olivia Ali/Nevada Sagebrush
A large crowd gathers in front of the Federal Building in Reno, Nev. to rally in light of George Floyd’s death.

George Floyd, an unarmed African American man, was killed by ex-officer Derek Chauvin on Monday, May 25. The officer killed him by kneeling on Floyd’s neck for over eight minutes.

Once stationed in front of the Reno Police Department, protestors tore down a flag off the flag pole and set it on fire. Protesters also began banging on the windows, throwing trash and spray painting the windows and walls of the station. During protests in front of the police station, Reno Police Department officers stood watch from the roof but did not interact with any protesters.

Protesters then marched around Downtown Reno under Circus Circus, under the Reno Arch and back to the intersection at First Street and Virginia.

According to reports, Reno City Hall was broken into and set on fire. It is unclear who exactly was responsible for breaking into City Hall. Additionally, rocks were thrown into the second and third floors of the building.

After City Hall was raided and the fire was put out, Reno Police Department released tear gas and came out in riot gear. Protesters began standing off with police officers around 7:45 p.m.

“These are our neighbors & Nevadans,” Gov. Sisolak said in a tweet. “They stand ready to support state & local law enforcement in preserving public safety as well as the ability of individuals to exercise their rights to peacefully demonstrate.”

Sheriff Darin Balaam released a statement on the Reno protests.

“Tonight, our community is continuing to face hardship and we are just as angry about the events that happened in Minneapolis as those demonstrating,” Balaam said. “But, please, for the safety of yourself, your family members, and our community go home peacefully.”

“These were not the event-goers of the Black Lives Matter demonstration,” Soto said on Facebook. “They held a peaceful protest and, for the large majority, left the area. Many of these individuals that created and caused so much damage to our Biggest Little City were from areas other than Reno.

“We are the students and leaders of tomorrow. I encourage you to use your voice on this campus and do something about [police brutality] now because it happens in Reno,” Hall said.

President Marc Johnson of the University of Nevada, Reno sent out a mass email condemned racism, abuse of power and brutality which led to George Floyd’s death.

“As a nation, not only have we not resolved the historically deep wounds of structural racism, inequality, injustice and violence in our country, but those divisions, dramatically intensified in recent times, significantly challenge our democracy,” President Johnson said.

According to the Reno-Gazette Journal, Reno Police arrested 23 people Saturday night. Clean-up efforts were held the morning after the event.

The #BlackLivesMatter Reno protest halts its march where it started to sing Lean On Me. It quickly continues its path forward. pic.twitter.com/JsFh4TOhFu

The Reno Police Department after protesters have continued marching. pic.twitter.com/IEeC7SYmXm

I’m posted at the #BlackLivesMatter rally at the Believe Plaza in Reno, Nevada. I will keep this thread going with updates. pic.twitter.com/F4yEjd3jXa

LAS VEGAS—Protesters returned to Las Vegas on Saturday, May 30 for a second night of protests.

The protest officially started at 7:00 p.m., but more than 100 people were there prior.

Taylor Johnson / Nevada Sagebrush
Police in riot gear guard and prevent protesters from entering the Fremont Experience on Saturday, May 30.

Tear gas was thrown in front of the protesters around 10:10.

The protesters were chanting “I can’t breathe” as we arrived on scene. pic.twitter.com/5I2sb2G5vt

I am reporting live from the 2nd night of #BlackLivesMatter protest in #LasVegas for @NevadaSagebrush. Updated to come pic.twitter.com/F66fMC8h9L

The Nevada Sagebrush can be reached at oali@sagebrush.unr.edu or on Twitter @NevadaSagebrush.